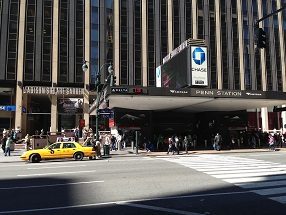 Where is the
Best Penn Station Office Space?

Finding the best Penn Station office space is straightforward when your criteria are limited to: (1) a one square block boundary around the station; and (2) the highest quality office buildings. The most compelling reason to locate your office here is the immediate access to transportation to/from NYC and within the city itself. Penn Station hosts the Long Island Railroad, New Jersey Transit and Amtrak as well as the A, C, E, 1, 2 and 3 subway. One block to the east on Sixth Avenue and 34th Street is Herald Square where the PATH train to NJ and the N, Q, R, B, D and F subway are located.

Both One Penn Plaza (1972) and Two Penn Plaza (1968) are situated on top of the station and provide direct access to trains. These Class A buildings deliver the overall best Penn Station office space and encompass 4,131,000 square feet. Historically, they have maintained a vacancy rate of less than 3%. High profile tenants include Morgan Stanley, Cisco Systems, BMG Columbia House, Madison Square Garden,  McGraw Hill and PowerSpace & Services, a premier furnished office space provider.  At One Penn Plaza offices ranging from 2,227- 31,000 rentable square feet are available with an average asking rent of $65.00 PSF including a new turn-key office constructed by the Landlord. Two Penn Plaza is more economically priced due to its smaller windows and priced from $55.00 PSF.

450 Seventh Avenue (1931) is located at the northwest corner of 34th and 7th Avenue and provides a direct underground connection to Penn Station. It is an owner occupied Class B building with a broad spectrum of professional Tenants, some of which have been in the building since it opened! Currently available spaces range from 2,007- 8,025 RSF and have an asking rent of $51.00 PSF. The Landlord will construct a new office for qualified Tenants.

14 Penn Plaza (225 West 34th Street) between 7th and 8th Avenue has office space from 2,512- 28,000 RSF that is priced at $55.00 PSF including a new office build out. This Class B building is home to mostly smaller service businesses. The owner has undertaken a substantial capital improvement program that includes new corridors, bathrooms and mechanical systems.

Owner occupied, managed and impeccably maintained Seven Penn Plaza is located at the southwest corner of 32nd Street. This boutique Class B+ office building (1921) recently completed a renovation of its lobby. Offices from 4,000 RSF up to 24,151 RSF full floors with windows on four sides are currently available for lease. Asking rents are $50.00- $53.00 PSF and include an elegant turn-key office built by the Landlord.

Finding the best Penn Station office space requires the help of a knowledgeable commercial real estate broker like Cogent Realty Advisors. Cogent Realty is a Tenant Representation firm whose mission is to find your business the right office at the right price.